The young cobbler behind Donhall & Bell’s finely-honed footwear traces the evolution of the firm’s signature slipper – a blend of timeless artisan skills and intelligent contemporary design.

You can’t make a shoe without a shoemaker. When they first started their label in 2012, founders Peter Mulhall and Martin Bell had a clear vision of the kind of footwear they wanted to create. But when it came to the expertise needed to develop their idea into tangible reality, they turned to cobbler Steffan Safhill. “Peter got in touch via a friend in the footwear industry,” Safhill says. “She contacted me, explaining she had this guy who was trying to do a new range of footwear, and she thought I might be able to help. So we had a chat, and I met up with Peter in London, and looked at what he’d been doing. He brought along a dress slipper – your basic black slipper, in a way, but with a very modern, really high-quality feel. “Really, the key thing was finding the right manufacturer to produce the shoes. It’s a real challenge for a new brand starting out. When you begin to work with factories, doing what are – relatively – very small runs, it can be very hard to get the detail right. You need a maker that gets what you do, and understands the route you need to go down. You just need a maker that get what you do, and understand the route you need to go down. So we spent our time visiting potential factories, and finding someone who had the right expertise. We looked in both Britain and Europe, and eventually found a maker in Spain. It doesn’t make Donhall & Bell any less of a British brand; the fact is, these guys are the best, and they do it every week, week in and week out. It seemed like a perfect fit: they could do all the unusual, intricate things Peter and Martin wanted.” 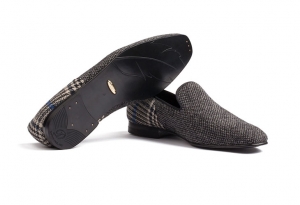 Safhill knows what he’s talking about. He runs his own successful footwear label from a pretty, turreted corner house in Leicester – a city that, after Northampton, was once one of the British shoemaking industry’s great powerhouses. He has over a decade’s experience working in the field – and a passion for shoes that goes back much, much further than that. “I studied Art & Design in college,” he explains, “but I didn’t really enjoy it. It was a general course, that covered a whole range of topics from art to fashion. When I was deciding what to do next, I looked at the various courses available and footwear just seemed like the obvious choice. Whenever briefs had been set in the art course, I always related them back to shoes in some way. When I went for interview at the shoemakers’ college, the tutor told me that I was the only one who actually had footwear projects in their portfolio, and he put me straight onto the course. And I didn’t look back from there.”

After graduating, Safhill spent several years consulting for other British firms, learning the business from the inside out. By the time he came to work with Donhall & Bell, he knew that success would hinge on establishing the label’s focus. “I’ve worked with various brands over the years. The main thing, really, is that you need to get your handwriting clear – and a lot of that comes from Peter’s personal style. The Donhall & Bell slipper has a really distinctive shape; it’s quite a narrow, slim, refined look. We took the decision to make the upper from one whole pattern piece, to keep things as streamlined as possible. And that’s where my pattern cutting comes in. You really need that expertise to be a good shoe designer. But using a single pattern piece is very unforgiving. It’s a real process to make a single piece of leather fit smoothly, and sit perfectly – and to be able to grade that across a range of sizes.” 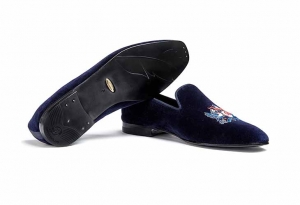 Safhill is quietly pleased with the results. “It’s very much a modern approach,” he muses, “but using traditional techniques. You can’t really go too conceptual when it comes to footwear. It’s more about the style you bring to it, and the take you’re able to put on it. And these slippers definitely have a new take.”
But for all the time and skill invested in the look and feel of the slippers, Safhill seems to take as much pleasure in the hidden details. “It’s things like using a a leather insole board, rather than a synthetic one. A lot of modern footwear uses a synthetic insole as standard. But the synthetics don’t gave any give to them – whereas, over time, a leather one will move and stretch, so it moulds perfectly to your foot. And that’s the level of thought that’s gone into these slippers.” 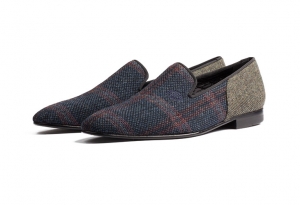 Beyond honing the form and construction of the Donhall & Bell slipper, Safhill’s also worked with them on broadening the range – particularly on introducing other fabrics, from contemporary suedes to classic Harris tweeds, to ensure the brand has as broad an appeal as possible.
“You could see that the slipper was starting to make a comeback over the last few years.” he reflects. “A lot of the American musicians were wearing them, so it became quite a cool, hip-hop thing. You were starting to see slippers being worn in a slightly cooler way, and made a bit more glamorous. Which is great – but we wanted to make it work, not just for special occasions and red carpets, but for everyday life, in every season.”

Named one of Britain’s best-dressed men by both GQ and Esquire, blogger Prince Cassius is known for his confident, colourful sense of style. (That, and the best Afro in the business). A familiar face on London’s fashion circuit, his made-to-order MAYFAIR Eagle slippers are his go-to piece.